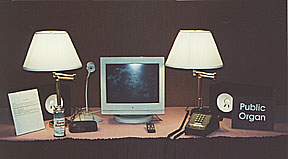 The human brain is the most public organ on the face of the earth, open to everything, sending out messages to everything…We pass thoughts around, from mind to mind, so compulsively and with such speed that the brains of mankind often appear, functionally, to be undergoing fusion.

Public Organ was an interactive Internet piece commissioned by the International Computer Music Association for their 1995 ”Digital Playgrounds” conference in Banff.

Public Organ is a distributed digital playground created for ICMC95 and dedicated to author Lewis Thomas. Your actions determine the state of the installation, putting it into Loop, Lurk, or Link state. An image of the installation also exists on the World Wide Web, so while some of the texts, images and sounds have local origins, others originate with individuals using public or private web browsers on the web. Try sitting down in front of the TV, pushing buttons, picking up the phone, and generally exploring so you can start looping, lurking and linking!

The title was inspired by the following passage from The Lives of a Cell by Lewis Thomas:

The human brain is the most public organ on the face of the earth, open to everything, sending out messages to everything…We pass thoughts around, from mind to mind, so compulsively and with such speed that the brains of mankind often appear, functionally, to be undergoing fusion.

“Public Organ” also suggests a musical instrument or a means of action or performance that is open to all persons.

Evolution and the Information SuperHypeWay

When I re-read the 1974 book The Lives of a Cell, in 1994, it was extraordinary how many of the passages seem to have anticipated the Internet and the World Wide Web, for example:

Sooner or later, if it keeps on, the various networks will begin to touch, fuse, and then, in their coalescence, they will start sorting and retrieving each other, and we will all become bits of information on an enormous grid.

Collectively, we hanker to accumulate all the information in the universe and distribute it around among ourselves as though it were a kind of essential foodstuff…

We are becoming a grid, a circuitry around the earth.

Given any new technology for transmitting information, we seem bound to use it for great quantitites of small talk.

When I first proposed this installation, I had not anticipated the explosion of commercial and popular interest in the Internet this year [1995]. My hope is that this piece succeeds in poking fun at some of the more vague and groundless claims surrounding the Internet without discounting some of the more interesting implications of a distributed world wide network that is neither entirely point-to-point, nor entirely broadcast.

Lewis Thomas who, in writing about the most public organ, could not imagine that an organ so complex, so intricate and so powerful, was destined to be utilized solely for the production of a kind of background noise; he speculates that

…perhaps we are only at the beginning of learning to use the system, with almost all our evolution as a species still ahead of us… Later, when the time is right, there may be fusion and symbiosis among the bits, and then we will see eukaryotic thought, metazoans of thought, huge interliving coral shoals of thought.

What we need is more…unrestrained and obsessive communication, more open channels, even more noise, and a bit of luck.

The Elements of the Installation

Images, texts, sounds, and processes in the installation reflect three analogous processes described in The Lives of a Cell:

I have often drawn ideas for composition from biology: lysogeny, mitochondria, levulose, etc. But I was never able to satisfactorily represent one of the most important ideas in Lives of a Cell—that there is a kind of collective thinking and exchange of information going on that is structurally analogous to the trend in living organisms towards symbiotic linkages, chemical message-passing, and an increase in complexity. When David Rosenboom invited me to CalArts in 1992 and Richard Zvonar invited me to perform with him at the Electronic Cafe in Santa Monica, I realized that a piece about collective thinking ought to take place on an organic self-organizing network—something exactly like the Internet.

Thanks to Kurt J. Hebel for the high level of technical and moral support and to Mark Lentczner for sharing his CU-SeeMe phone-ringer code and for connecting with the installation during the conference!