Listen to a stereo mp3 version of (the 4-channel) Double-well recorded at the premiere at f.EAT Stony Brook in 2016

This piece was inspired by the story of how, when the universe was young, the Higgs lived in a double-well potential and there was symmetry between the weak and electro-magnetic forces. But, as the universe cooled down, the Higgs settled into just one of the wells and broke that symmetry, resulting in the universe in which we find ourselves today. 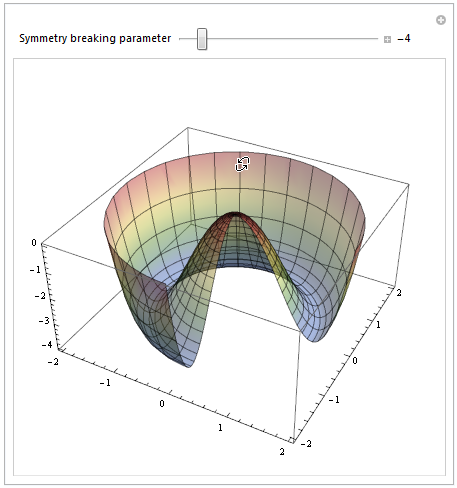 In this piece, a simple two-dimensional double-well serves as a metaphor for some of the binary decisions we make (and those that are made for us), each one of which can lead to a completely different future. Is a bi-stable system the ideal model for democratic elections or could a system with additional equilibrium states be more representative?

In “Double-well”, you control the sounds. Each of you has a “sound-generator”; the microphones placed around the audience capture your sounds, process them, and play them back at various times throughout the piece. Watch the screen at the front for a “score” indicating when the microphones are “live” and when you can just relax and listen. Your sounds control some of the Kyma-generated sounds — especially when you play in sync with other people in the audience.

A “double-well potential” is a model of a “bi-stable” system shaped like a rounded “W” with two equilibrium points and a hump between them. 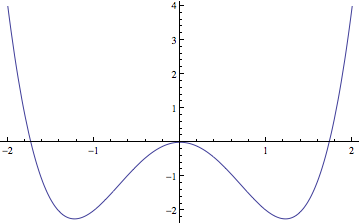 Depending on its initial energy, a particle tossed into the system can settle into one or the other of the two wells or oscillate between them in a figure-8 shape, crossing the hump in between.

Thanks to physicist Nicolas Chanon, physicist and science fiction author, who inspired this piece when he drew a double-well potential on the whiteboard during GVA Sessions 2015.

In Double well, the audience generates sound material that is live-analyzed-resynthesized or used to drive a double-well potential system. The system in Kyma is:
x’ = y
y’ = x – x^3 – (s*y) + (a * F), where s is a damping function and a is the strength of the driving function

Sometimes the system outputs (x and y) are audio signals and sometimes they are used to control parameters of some synthesis and generate animations displayed as part of the “score” that the audience sees projected on a screen at the front.